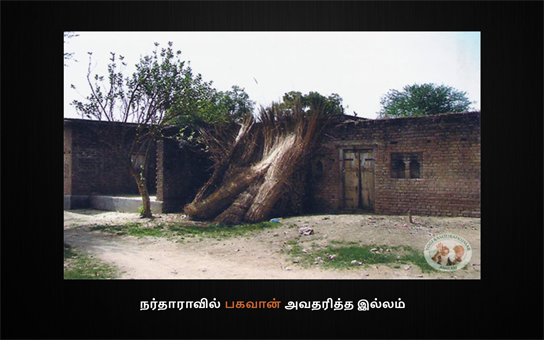 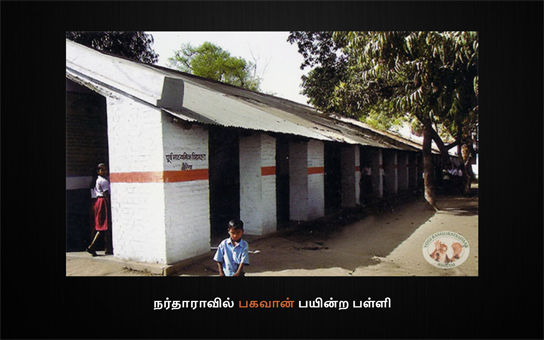 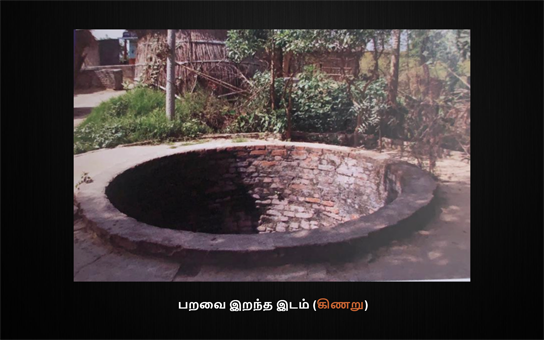 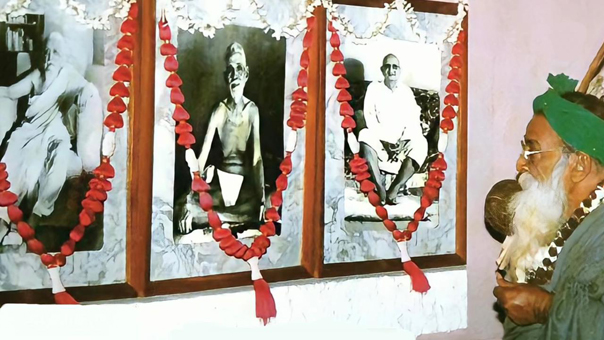 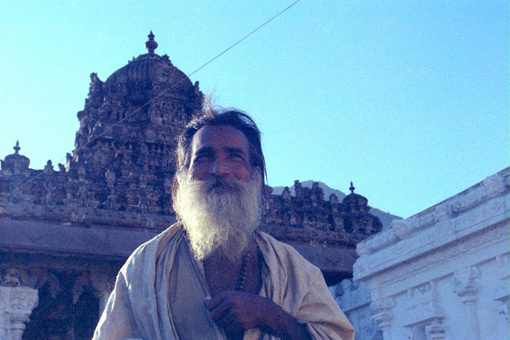 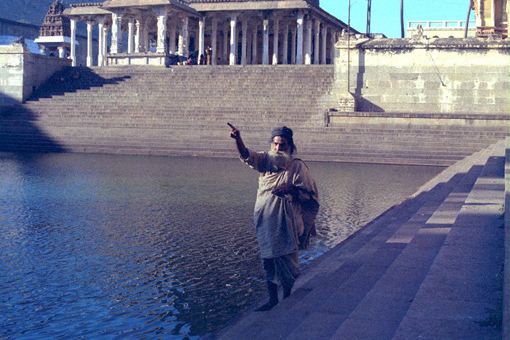 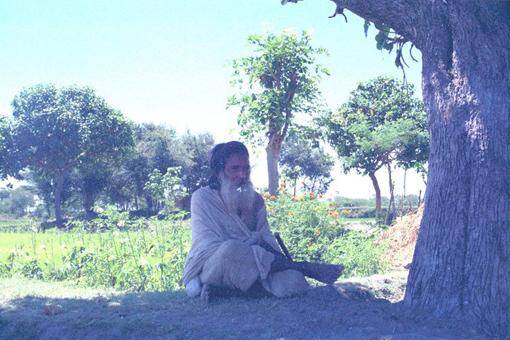 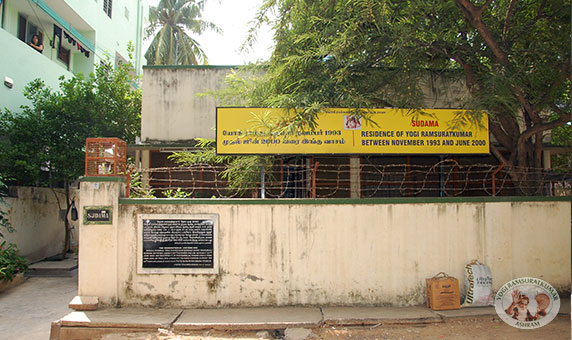 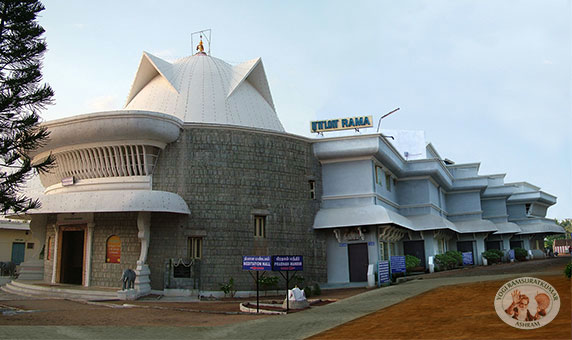 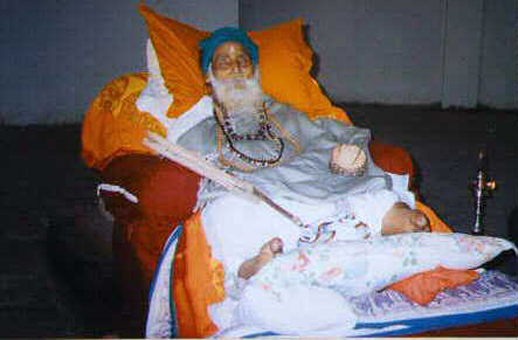 Bhagwan Sri Yogi Ramsuratkumar was born on December lst in 1918 in a small village called Nardara, on the banks of the river Ganga in Baliya district, in Uttar Pradesh, to a very pious Bhoomihar Bhramin couple. Right from childhood, he loved the company of the mendicants who gathered on the banks of the Ganges.

One evening, when he was twelve years old ,he went to draw water from a nearby well and saw a small bird perched on the edge of the well. In playful innocence, he threw a rope at the bird only to shoo the bird away. But the bird was hit and it fell dead. Ramsuratkumar froze in shock and tried his best to revive it but in vain. Grief-stricken, he cried and cried, not knowing what to do .For the first time the question of birth and death arose in him. After this he began to seek solitude more and more and plunged into meditation.

At the age of sixteen, he ran away from home without telling anyone, reached Kashi and stood in the shrine of Viswanathji .There he found the whole place filled with an effulgence and was completely lost in the experience. Afterwards he went to Sarnath and stood near the monument where Sri Buddha gave his first teachings and had a deep experience. Sri Kapadia Baba held His hand in His own and hailed that one day this hand would have more power than his!

One day, When he was returning from Kapadia Baba’s Ashram, he heard a voice like an Oracle which said," This is Vivekananda calling, what you are now doing is not your work!" The first time he turned around to see no one was around and then thought to himself that it was His own imagination. Another day, it happened again, he knew it was truly a call from Vivekananda himself. After that, he once again engaged himself in more vigorous sadana.

For 9 years he ate only green vegetables, fruits and milk. The one goal of his life was to become one with God. He read Sri Aurobindo's book' Lights on Yoga'. All put together, added oil to the divine fire of his longing for God.Our Swami reached a state of mind when nothing but God became his only goal of life. He decided to go to Sri Aurobindo's Pondichery Ashram. Just when he entered Sri Aurobindo's Ashram ,he found, a deep peace filing his entire being. He knew instantly that It was Sri Aurobindo. After a few months there, he came to Ramanashram at Tiruvannamalai and began to sit before Sri Ramana Maharshi. Under the compassionate gaze of Bhagwan Sri Ramana, he had some deep spiritual experiences but the final fulfilment was evasive

A fellow visitor told him about Papa Ramdas of Anandashram, Kerala, upon which, he felt a prompting to visit the place.Yet, even after two visits , he returned to the Himalayas. In 1950, the news of Mahasamadhi of Sri Ramana and Sri Aurobindo came as a shock . Again, a deep inner urge took him to Anandashram in 1952. Papa initiated Ramsuratkumar with the mantra "Om Shri Ram Jai Ram Jai Jai Ram" and gave an instruction to chant this Mantra all the 24 hours. This entered like the Killer Arrow of Sri Rama and triggered him into a ceaseless japa .He climbed up to a cave in the nearby Manjapathi cave and plunged into ceaseless Japa of Ram Naam. With no thought for food or sleep, his incessant Japa continued only for 6 days and 6 nights. On the 7th day, the final enlightenment dawned on him. Referring to it, later on he would say," My master papa Ramdas killed this beggar. This beggar died at the Lotus Feet of Papa Ramdas."From then on, there is only the Supreme Father in this body, nothing else, no one else!"

It took 7years of wandering before he landed at Thiruvannamalai. In those 7 years, he wandered from Kanyakumari to the Himalayas like a mad beggar completely surrendered to the will of God. After Seven years of wandering, he arrived at Tiruvannamalai in 1959. After 14 years of spiritual Ministry in the streets, he began to sit under a punnai tree near the Railway Station and do his Father's work.People from all walks of life visited him. Not only high level politicians, Doctors, Engineers, Scientists, musicians, and writers, but also the Common people who called him lovingly "Sami "," visiri Sami"(saint with palmyrah fan), came and sat at his feet.

Seeing his appearance and behaviour, the children of the street would make fun of him saying, " madman, madman" and throw stones at him.The coolies and mercenaries of the local politicians would chase him and beat him.Just because he was a North Indian,and a Hindi speaker, they tortured him in different ways.

After 17 years , In 1976, the devotees bought a house in Sannidhi street and begged him to go and stay there. In 1977, Bhagwan accepted their prayer and started to live there. Bhagwan's Spiritual Ministry Continued in Sannidhi street house for the next 17 years.

Due to the decline of his health and the knowledge of his own life-span, he eventually consented to an Ashram for the sake of the devotees. On 20.2.2001 ,Bhagwan left his Physical body and attained Maha Samadhi casting all his devotees in a flood of unbearable grief.. Bhagwan declared, Today, His Name "Yogi Ramsuratkumar" is a powerful Mantra for thousands of people. It gives help, guidance and protection to all those who do 'Japa' of this Name. We the devotees should live in constant remembrance of Him, by holding on to His Feet and His Name and make our life fruitful and ever watchful; He blesses all the devotees, all the time, living in their Close proximity in His subtle form. Our Bhagwan is the very life of us, the devotees. . That His grace would be reaching out to everyone is ever assured.